Community Give their Views on Dalintober Design Competition 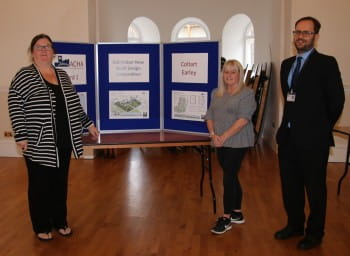 Argyll Community Housing Association (ACHA) recently held an event to present proposals received from entrants to their design competition for the new Net Zero Carbon development that will hopefully replace the Dalintober Estate in Campbeltown.

The event was held at Campbeltown Town Hall on the 22nd September and the community came out to support the event. ACHA received lots of valuable feedback from attendees, which has been used as part of the final interview process which took place on Thursday 23rd September.

Alastair MacGregor, ACHA Chief Executive commented “It has been good to see so many people from the community coming out and giving us their views about the design proposals for the new build project, we appreciate all the support we have received”.

The successful design proposal will be announced on Thursday 7th October.

In the photograph are Carol Anne Shields & Lorraine Gillespie from the local community and Richard Gates, ACHA Architect/Building Surveyor.