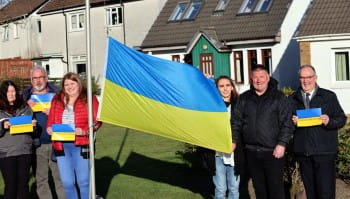 Argyll Community Housing Association (ACHA) has held a vigil for Ukraine at Dalrigh Gardens in Oban.

The gardens, owned by ACHA, are utilised as a common public space at the entrance to Oban, and are a highly recognisable landmark in the town.

The vigil was held to thank ACHA staff, tenants and volunteers in the community who had raised money, obtained vital supplies and driven those supplies to Eastern Europe and to stand in solidarity with the people of Ukraine.

The vigil was addressed by Valeriia Samoilenka, a Ukrainian citizen who has made her home in Oban. Valeriia thanked the people of Oban and its surrounding communities for the solidarity shown and the welcome that will be here for refugees. Valeriia raised the Ukrainian flag at the close of the ceremony, which heard a rendition of ‘Freedom Come All Ye’ as a signal of international solidarity, followed by the Ukrainian national anthem. 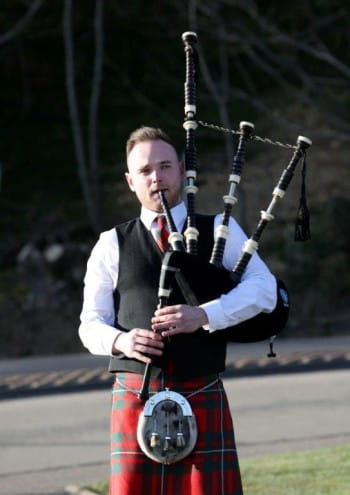 Roddy McCuish the Chair of ACHA’s Board of Management unveiled a banner of solidarity underneath the flag. Alastair MacGregor, ACHA’s Chief Executive, gave a speech where he posed the question “If housing need is anything, it has to help those that are fleeing persecution and are literally being bombed to smithereens”. He compared the energy the commitment and the bravery of those fundraising and going to help in Ukraine, with an example of those that left Scotland to join the International Brigades in Spain in 1936, who stood up to fascist tyranny.

Valeriia, along with other support groups, are preparing for the refugees to arrive in Argyll. 37 Argyll families have already offered to take refugees in and ACHA has made its commitment clear to Argyll and Bute Council and the Scottish Government that the organisation will rehouse Ukrainian refugees as well.

The vigil was concluded by Jamie McGregor from Connel, playing The Ground of the Haunting Pibroch - Glengarry’s Lament, followed by the great 4-4 March Donald MacLean’s Farewell to Oban. Alastair MacGregor said in conclusion

“This is a very emotional evening and it shows there is so much good around, and I would like to thank the ACHA tenants, staff and all the volunteers who have done so much in the last 6 weeks and will continue to do so”. He further added “This site at the entrance to Oban is passed by hundreds of thousands of locals and visitors every year. The banner and Ukrainian flag will stay her as long as the struggle goes on”.

Photo 1: Valeriia Samoilenka from Ukraine raises the Ukrainian flag, accompanied by Susan Roberson, Alastair MacGregor and Christine Cameron from the ACHA Staff, and Roddy McCuish and Jim Lynch from ACHA’s Board of Management. Photograph provided by Kevin McGlynn